Blackish: Not black, not white but somewhere in between

My journey as a biracial person

I am a biracial girl. My mom is black and my dad is white. I grew up in a diverse suburban area in California and my character, my talents, and my attitude is what defines me. At least that’s what used to define me. It seems like now my race, my skin color, my hair, my look is what defines me. I’ve never experienced the colorism and segregation that I’ve experienced here in St. Louis, Missouri, here at my school, or from my friends. I don’t have a good sense of who I really am anymore.

All my life I’ve had one of the most outgoing and determined personalities. I rarely let anyone tell me what to do or what to be, and if they tried they would know not to do it again. Life isn’t always easy, but you learn that it most definitely goes on. I moved to St. louis when I was 12 and very quickly learned that people are separated by what they look like and are treated in certain ways because of it. Call me naive, but I didn’t know that existed to the extent in which it did until I saw it here.

I never understood why being educated or being respectful was associated with white people or why black people themselves would associate wrong behavior with acting black.”

I always got comments and questions on my race and my family makeup, and after the constant badgering I never forgot I was a biracial person again. Now I’m 15, and going to a school in the city which is predominantly black. I am always reminded that I’m not “really” black, or that I look like a little Cuban girl. It sounds pretty innocent and to be honest it is, until it becomes the only thing people see and the only thing people talk about. I used to laugh it off because I was just trying to get by at a new school and place. I’ll never forget the times when people have said I’m not black enough to participate in certain conversations or when my “so called friends” tell me I’m so white. I’m so white because I don’t act “black”. I’m acting white if I’m respecting teachers and authority or talk like a valley girl. I’m acting black if I’m using words like “ain’t” or going off on somebody.

I never understood why being educated or being respectful was associated with white people or why black people themselves would associate wrong behavior with acting black. Everybody acts differently based on who they are around and what they grow up around, and that has nothing to do with the color of their skin or their genetic makeup. Apparently, having curly hair and being from California makes me believe I’m better than everyone, crazy right? But that’s my life on a daily basis.

After about 2 years of brainwashing, I simply wasn’t the person I had known myself to be. I had let the ignorance of what other people said become my truth, and taint my vision of myself. Never in my life have I examined others and myself the way I do now. Just like all white people don’t look the same and all black people don’t look the same, not all mixed people look the same. I identify as a biracial person and there’s nothing more to it. It seems as though the southern thinking ways of St. Louis have caused me to have an identity crisis, one that I currently still struggle with. The complex has caused a lot of harm, but if I could pull any good out of it I would have to say that all of these things have shown me how some people are, and how I don’t ever want to be or become. I don’t think people realize what they’re doing when they do it, or what they’re saying when they say it, because it seems funny, but it isn’t. The only thing that has helped me have compassion for others is the simple fact that I know where the ignorance comes from. It comes from a place of not knowing, given that they haven’t been exposed to diversity like I have. My wish for others is that they become educated on race and culture, so that as people, we aren’t defined or fixated on that. My wish for myself, is simply that I gain the love that I once had for myself again.

I never want to allow somebody else’s uneducated opinions and way of thinking to become my thoughts. Though I wish people judged me based off me as a person, I’ve unfortunately accepted that that’s not the mindset or space that everyone is in. Until then, I somehow have to figure out how to teach myself to love me again based off my character and not anything else. It’s difficult because I’m still trying to figure out who I am, but I guess this is just another part of my journey.

This story was a finalist for the Missouri Journalism Education Association’s Opinion Story of the Year competition. Click here for more information. 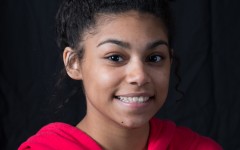 Finalist for the Missouri Journalism Education Association's Opinion Story of the Year competition for Blackish: Not black, not white but somewhere in...

9 Responses to “Blackish: Not black, not white but somewhere in between”