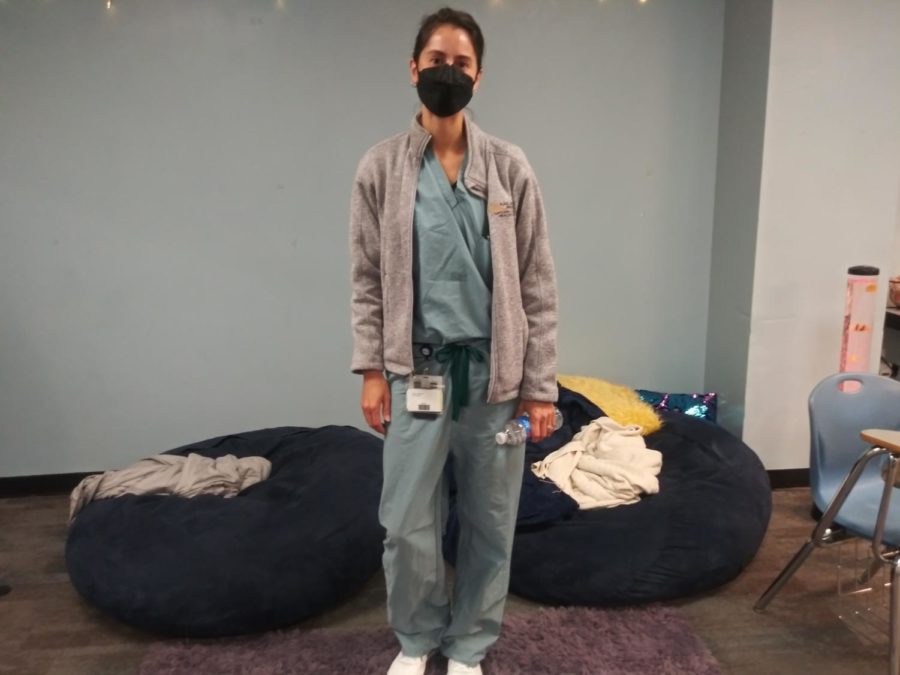 Counselor Russell Smith gave the future medical students of GCAA an opportunity to attend a presentation by future anesthesiologist, Kirstie Holtermann. Holtermann is currently in the program for anesthesia and is in a critical care residency at Saint Louis university.
At the request of Mr. Smith, she visited the school to give a short seminar on becoming a doctor.
Holtermann started the seminar by clearly stating that the misfortunes of a student’s high school career will not prevent them from becoming a doctor.
“I got good grades in high school,’’ said Dr. Holtermann. “That is nice, because you like- learn how to study in high school, but it really doesn’t have a big impact on becoming a doctor. It’s probably like not what you want to hear being in high school right now. But I have plenty of people that I’m like colleagues with now, who had like a 2.0 GPA in high school. So if you’re struggling right now, that doesn’t really have any impact on whether or not you can become a doctor.”
She then speaks about getting prepared for medical school,
First, In picking a major; she encourages students to pursue their interest because as long as you take the prerequisites, any medical school would accept you.
“They want to make sure that you have a certain amount of biology, chemistry and math so as to get into medical school, but there’s a lot of people who majored in theater or art or whatever you want”, said Dr. Holtermann. “As long as you have those prereqs to get into medical school, it doesn’t matter what your overall degree was.”
She continues the seminar by telling the students that if they do not get into medical school to keep trying at it because in the end just getting in is all that matters.
If you don’t get in the first time,” said Holtermann. “It’s not a problem at all. Some people have to apply like four or five times. That’s okay too. In the end, like no one cares how many times you applied or how you did on your MCAT like you’re in medical school, it doesn’t matter.”

According to Holtermann, it doesn’t matter which school you go to,
“With undergrads, I would say too, you don’t have to go to a big fancy, private undergrad, if you don’t want to,” said Holtermann. “I have people who I went to medical school with who went to like WashU and these big schools. And the only difference is they’re like $100,000 in debt, and I’m not.”
She then spoke more about her medical school experiences, telling students what to expect in a residency program.
“We would do, you know, a C section and then the surgeon would give you the suture and you get to sew up at the end and things like that,” said Holtermann. “You got to do some boring stuff. Like you’d retract, or you’d hold skin up, little things like that you’re not, you know, you’re not like the doctor, you got to start somewhere. In the beginning, you’ll like, sew stuff, and they’ll be like, that looks terrible. And they’ll take it all out and you redo it, right because you know, or like, you’ll do a lot of internal stitching….”
Wrapping up the seminar, Holtermann answered questions from the students and told them that feeling like they are inadequate is normal, but that they will persevere.
“You will constantly think like ‘you’re not good enough’ and you’re just gonna keep pretending that you’re good enough until one day you’re done,” said Holtermann. “And allegedly, you’re like a competent doctor. I’m still like looking around my peers. Like, they’re really smart. Like, how did I sneak by? Right? But like, I must be competent enough to be here.”
While answering questions, Dr. Holtermann reflects on her experiences and expresses the reward for all the years of schooling.
“Oh, it’s gonna take a long time,” said Holtermann. “Yeah, it is. But like that’s why it’s worth doing, right? Like it’s worth the weight. Yeah, I think a career that has a lot of – not prestige, but like respect within the field to like, ‘whenever you’re done, you’re a doctor’ like you’ll know you did that. Like you worked really hard to get there. And you’re gonna have a lot of respect with that. And you earned it at that point”
Dr. Holtermann ended the seminar in words to encourage students to follow their medical dreams and succeed.
“You all can do it,” said Holtermann. “Like, I haven’t met one person that’s not smart enough to be a doctor. So if that’s a concern, like, that’s no problem. If you’re willing to work hard enough. Anyone can be a doctor if they want.”