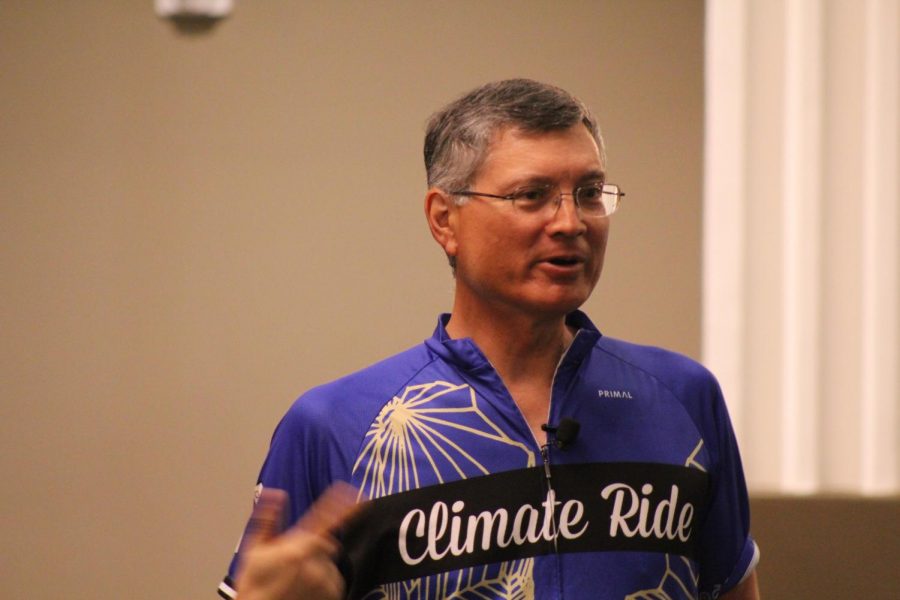 Tim Oey speaks to middle and high school students about Zero Waste and biking on April 9th 2019. He answered various questions about his trip so far and gave advice about ways to reduce waste. “When I finish my cross country, I will have climbed the equivalent of about 6 [Mount] Everists,” said Oey.

But Tim Oey is not ‘most people’. Tim is biking the whole way there.

By May 27th, Tim Oey will be arriving at his college reunion at Harvard University, which from his home in San Francisco California, is about 4,500 miles away.

On April 9th, Oey took a stop at GCAA to talk to the Green Machine and a couple of other middle school and high school classes about his journey so far. During his presentation, he talked about his goals and the reasons for taking this trip.

One reason he’s taking this trip is to inspire people to try going ‘Zero Waste’, which has multiple health, financial, and environmental benefits.

“The Zero waste movement is popped up in the last 10 years as a Grassroots movement trying to encourage people to think more carefully about what they get, and aspire to getting as low waste as possible… And going zero waste actually helped produce my costs for living… [doing public service work] pays a lot less, so I had to go under more strict budgets, so Zero Waste actually has reduced costs a lot… And I’m healthier, and I don’t have much to throw out.”

As of now, Oey is down to a quart of trash per month.

Oey is also trying to inspire people to ride bikes more often. According to Oey, one of the biggest ways to reduce Greenhouse gasses is by biking more often.

“As I’ve showed in my presentation, [biking] is the single biggest way we can reduce greenhouse gasses… transportation just generates so much CO2 when we drive around, and it’s healthier for you.”

Green machine member Xavia Bell said, “I’ve told all of my family about the idea of going Zero Waste, and we’re trying… We’re going to do less car rides, and we’re going to try to do more biking, more walking, more [of] anything we can do to keep the Earth clean… We’re planning on, instead of going to the grocery store to get our vegetables and stuff, we’re trying to make our own vegetable garden in our backyard.”

On his website, Oey says that “People are powerful. We have changed the world in many ways and we have the power to improve our world rather than destroy it. Connecting with each other is key to working together, which is why I am doing this ride. Together we can keep our world a beautiful place for all to live.”

While Oey bikes around the country and gives presentations to different schools, he’s also trying to reach his goal of raising $44,000 for four non-profits: three biking groups and the Union of Concerned Scientists.

“I originally set a goal of raising $44,000 and basically trying to raise $10 per mile… I’ve raised about $8,000 so far… But I’ve also been planning the trip—which takes a lot of logistics—organizing and figuring out where I’m staying, which is a lot of contacts, and setting up talks, which is a lot of time to set up talks with all these places. And so I haven’t been doing as active fundraising as I would like to do. So I’ll get back to that… so I still think I could reach 44 thousand dollars, I’m running a little behind right now,” Oey said.

But overall, Oey hopes that those who hear what he has to say will try biking and walking more often.

“You get to experience a lot more of life and the world when you bike and walk rather than driving or flying. So right now, if I’d flown to my reunion… I wouldn’t have met all of you great people here. But biking through, I get to say hi, get to know you, and just all about our world and humans—we’re social creatures, we like making connections and meeting other people… Just get out there and experience the world, it’s a great world.”