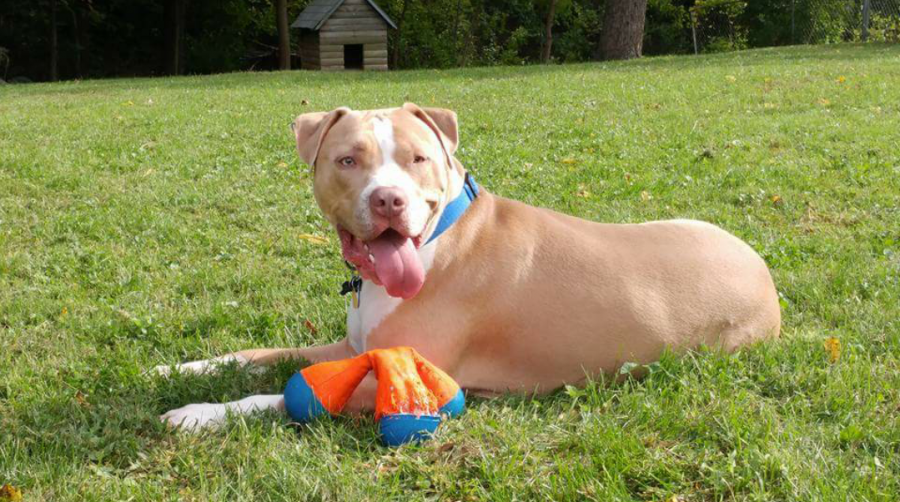 A photo of the photographer's pitbull.

Recently, a controversial video has been circulating facebook and has received plenty of critical responses. The video advocates for people to stop adopting pit bulls, a dog breed often perceived as dangerous. There was a rumor this ad would be played during this year’s super bowl, and although this ended up not being true, the arguments made in the video are still worthy of discussion.

Before diving into the arguments here, we must understand some background information about pitbulls. The pitbull, or American pit bull terrier dog, was originally bred as bait for bull and bear baiting, where dogs are made to harass a tethered bull. The bulldog was also bred for this purpose. After this sport went out of style, they were used in dog fighting rings. Because of this, they were bred specifically for obedience so that they could be easily raised as vicious killers, but the dogs themselves are not to blame for how they are raised.

Because of this, the breed is very powerful, and as a result can be very dangerous. This is the reason that this breed is the subject of fear. However, just because pit bulls are capable of great harm doesn’t automatically mean they will cause harm. How a dog is brought up and what it is taught to do makes a huge impact on its temperament, and since pitbulls are known for obedience, this is even more so the case, as they can easily be taught to be vicious, and they are often used in the cruel, abusive practice of dog ring fighting. This history is what drives the common misconception that this breed is malicious.

The fact that this breed is so obedient magnifies the effect that their upbringing has on their behavior. This quality can be used to raise a pitbull as a loving and friendly pet.

Knowing that, there is no doubt that pitbulls are to be handled with caution, and certainly not everyone should own one. I am not opposed to taking extra measures to make sure they don’t end up in irresponsible or abusive hands, but the idea that they should never be owned is flat out wrong. We have the opportunity to shape the future of this breed, and not adopting them will not fix the problem. What we have to do is be more responsible owners.

Now let’s dive in to the specific facts used in the video. It begins by claiming “they kill the most kids”, then continues with“they killed the most family members”. It then gives these statements context by saying “one breed killed 75% of the people who were mauled to death in 2017”. “Pit bulls killed 29 Americans in 2017”. It ends by asking its viewers not to adopt a pit bull.

Let’s break this down. The problem with the video it that it gives no context to the statistics it gives. That in itself it a flaw, because context of a statistic is just as important as the number. Without it, the reason for the fact is missing. This may or may not be intentional.

The thing about the statistics is that they can change, and there’s a way to do that without ceasing to adopt the breed altogether. By responsible pet owners, we can change these statistics and show the type of dogs pitbulls truly are.