Kingdom Hearts III, the end of a seventeen year journey 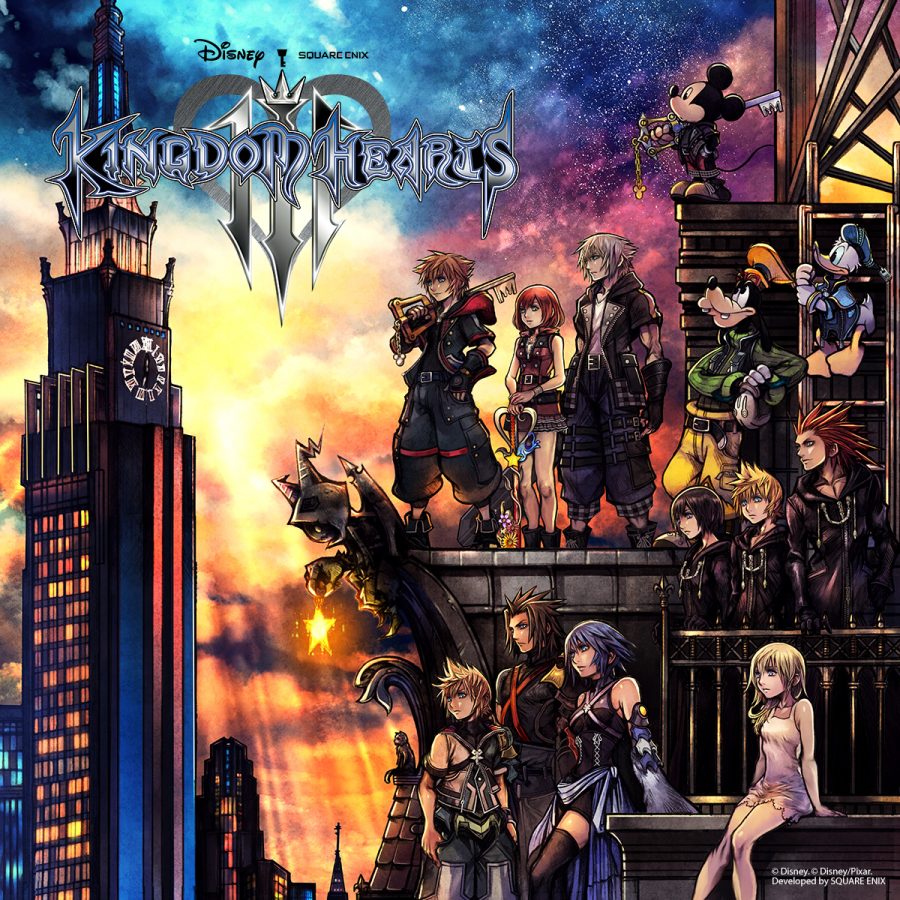 The official cover art used with permission from https://press.na.square-enix.com

After fourteen years, Kingdom Hearts III, or Kingdom Hearts 2.9 the publisher Square Enix jokes, has finally been released, and is the final game in the Dark Seeker Saga, which fans have been following for about seventeen years. The story might be confusing to beginners of the series, and is at times a bit strange, but that quirkiness is why so many people love the game.

The story of Kingdom Hearts III is about the main character Sora as he goes on a journey of self discovery, so he can gain the power of waking, which will allow him to wake all the characters that “lost their hearts”, disappeared, or other Kingdom Hearts equivalents of death which seems to take more of a symbolic function.

In Kingdom Hearts your heart is not only a metaphor for your soul. It’s also physical floating heart that also happens to function like your soul. Using the logic of the game it is possible for multiple hearts to be inside one body, or for there to be none at all, which turns the heart into a bug-like shadow monster thing (and assorted creatures) called a Heartless, whose main goal is to feed on others untainted hearts. Also darkness and light (also known as good and evil) are tangible substances.

Kingdom Hearts III is a smooth and polished experience that encourages exploration and experimentation. The first world you play in the game is Olympus and I was impressed with the level of detail and different types of actions you could experiment with. I also enjoyed how nice the settings looked, and how the art fit the Disney and Final Fantasy themes.The waterfalls were well placed and behaved very nicely, and the dark and lighter areas look very intentional. It certainly meets up to standards the E3 trailer showed us.

Something I dislike about the game though is how easy it is, there doesn’t really seem to be an exceptional level of skill needed to complete the game. In the first Kingdom Hearts, Sora was less overpowered and simply smashing the x button repeatedly wouldn’t be good enough. You had to prepare before going into boss fights and the fun was in learning from mistakes to eventually conquer them. This constant need to change strategy and items is what made Chain Of Memories (the chronological sequel) good also.

One of the biggest issues with Kingdom Hearts in general is how the Disney characters have no actual importance to the main story. The Disney elements are a huge part of the game’s aesthetic and mood, and because of that they should be integrated into the story. It’s understandable as Disney has a certain personality it wants for its characters, but this also limits Square Enix’s ability to create a game that has good character development.

Another issue in the game is the lack of character development in Sora. Although this most likely so people can project themselves into the hero role it still makes for an uninteresting story, especially when your story is all about emotions and finding yourself. Although kingdom has its story and gameplay setbacks I still don’t regret getting a copy because in the end it was about the experience which Kingdom Hearts continues to deliver well.