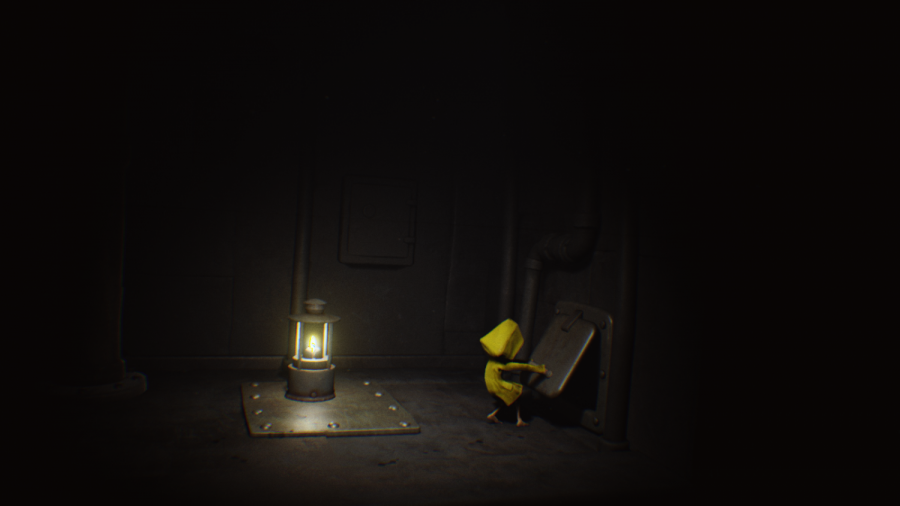 In this gameplay screenshot, Six opens the hatch to a vent so she can crawl through and make her way into the next room. It's one of the first times the player opens anything and is where you learn how to grab and open things.

Little Nightmares is a horror platform game developed by Tarsier Studios and published by BANDAI NAMCO Entertainment. The story follows the protagonist, Six, a young child in a yellow raincoat. At the very beginning of the game, Six wakes up from sleeping to find herself alone at the bottom of The Maw, an underwater vessel. The Maw serves as both a prison for children and as a resort where the seemingly rich and powerful go to feed their gluttonous desires.

The plot is for the most part unknown, due to the fact that there is no dialogue and very few cutscenes. However, I really enjoy that aspect of the game. It leaves you to speculate as to what really happened and what it’s really about, as many fans of the game have.

The muted colour palette and dim lighting add to the horror themes of the game, giving it a really creepy vibe. The character design is very well done, too. Six’s bright yellow coat stands out against the dark backgrounds. On the other hand, the enemies that Six encounters are dirty and their colour schemes match their dark surroundings, but don’t blend in so much that they’re hard to spot. It made me feel as though they truly belonged in the dark and dingy depths of The Maw, whereas Six doesn’t. Her bright yellow raincoat gave me a sense of hope that she’d be able to escape her own “little nightmare.”

Little Nightmares is overall a very quiet game, and uses both a mixture of silence and ambient music to convey a dark and mysterious mood, though more prominent pieces of the soundtrack are played during important parts of the game’s storyline. The quietness of the game lends to its suspense and can be useful when sneaking around, allowing you to hear the enemies, as well as Six’s footsteps. This aspect of the game made it very immersive. I almost felt as if I was actually there on The Maw, experiencing everything with Six.

One thing that I find to be quite vexatious about the gameplay mechanics in Little Nightmares is the lack of depth perception. While it is to be expected from a platform game that uses 3D models, rather than 2D ones, it still irritated me to some degree. It’s not too much of an issue, though. The lack of depth perception isn’t too difficult to get used to, but chances are that Six will die many times before you’re fully adjusted to it.

When Tarsier Studios was developing Little Nightmares, they wanted it to reflect how young children view the world, which is why Six is so small in comparison to her surroundings. They also tried to model the game after a dollhouse, setting up the camera in a way that makes it feel like you are an outsider looking in. I greatly enjoyed their choice of design for the game, as it gave it a playful and childlike feeling, even though the game may be dark and horrific. It almost felt like a child’s nightmare.

All in all, I’d say that playing Little Nightmares was a fantastic experience. It is definitely one of my top games of 2017—I definitely recommend it to everyone. It may be a bit pricey, but it was worth every cent. It’s been quite some time since I’ve played a game as immersive and beautiful as Little Nightmares.