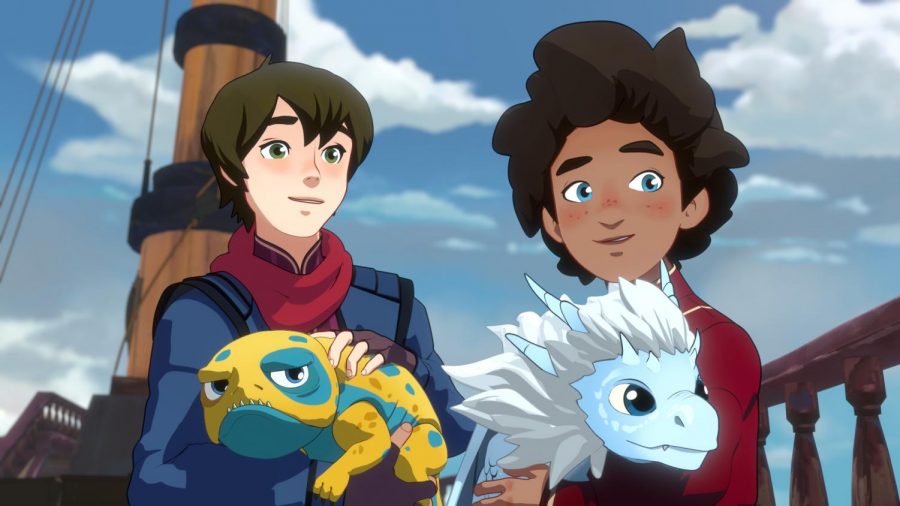 The first season of The Dragon Prince was met with much positive response, and left the fans wanting more. We all wanted to know what was next for Ezra, Callum, and Rayla after the hatching of Azymondias—or Zym—the son of the Dragon King. Thankfully, we didn’t have to wait very long. On February 15, 2019, only five months after the first season was released, Netflix’s “The Dragon Prince” released its second season.

Last season, Lord Viren told Soren to kill the princes and Claudia to kill her brother if he gets in the way of bringing the princes back. Now, the two siblings track down the princes and their companions and attempt to follow through with their father’s orders, both unaware of what the other had been asked to do.

Now that Zym has been hatched, the three friends and their animal companions head off to return him to his home in Xadia. They experience hardships, and Callum struggles with not being able to do magic after breaking his primal stone. As a human, he knows he wasn’t born with the ability to perform magic, but that doesn’t change the fact that he feels as if it’s what he’s meant to do.

Rayla, wanting to tell the princes about the death of their father, seeks help from Lujanne, a moonshadow elf and guardian of the Moon Nexus of the Cursed Caldera, whom the main characters met last season searching for someone who could save the dying dragon egg that held Zym. She knows that telling them could be risky, since they’d want to know why she didn’t tell them sooner, but hiding it could be even worse, as they might find out from someone else and be even angrier with her for hiding the fact.

Meanwhile, Lord Viren struggles to understand the importance of the mirror that belonged to the Dragon King, and what exactly it does. All of his previous attempts last season to uncover the truth of the mirror were fruitless, but he has refused to give up, convinced that there’s something special about it.

Overall, this season was fantastic, and was an amazing follow-up to the first season. It was just as full of adventure as the last season, and seeing the relationships between the characters grow has been really fun. You really get to see new sides to characters that you wouldn’t expect. All in all, I was not disappointed, and I can’t wait for the next season. It’s really living up to the hype and I’m excited to see what the future of this show will hold.