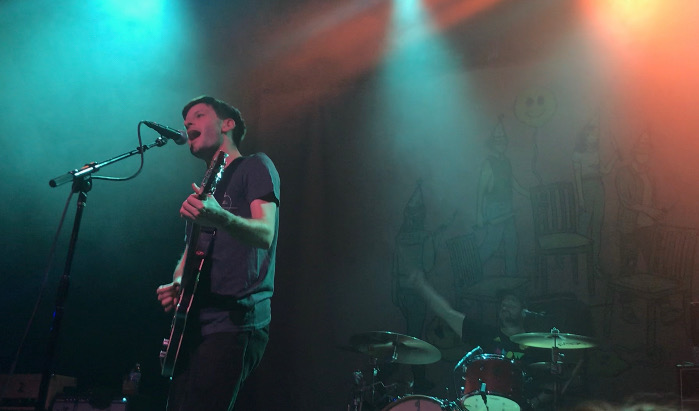 Four Canadian punks known as the band PUP appeared in St. Louis on September 24th and performed for a large crowd at the Delmar Hall. These Toronto rockers immediately broke the crowd’s tension once they started their first song, “Morbid Stuff.” The first thing you felt was the people behind you pushing you forward aggressively while everyone was jumping and moshing in the pit and there was never a moment where you were not getting shoved. The following song was “Kids” which somehow made the crowd even more exhilarated. Even though everyone was pushing and shoving, you still felt an exciting adrenaline rush through your body.

The band played through a few more songs and also had a few breaks between to talk or introduce songs. Their ninth song “Scorpion Hill” was one of the crowd favorites. The song starts off slow, then it abruptly speeds up to a fast pace which got the crowd going. During this song, the lead singer, Stefan Babcock, hopped off of the stage and reached for hands. I immediately reached for him and somehow my skinny arm in the front row was the lucky winner. Babcock grabbed me and someone else’s arm to prop him up into the crowd. He then let the audience carry him through the pit. Babcock rode the waves of our hands while hundreds of fans danced and jumped their way towards the middle of the pit where he was being held. He slowly made his way back to the front of the pit then reached his way to the stage as a security guard helped him up.

After about four more songs, Pup performed another fan favorite. The song, “Full Blown Meltdown,” made the audience go wild. Lead Singer, Stefan Babcock, hopped back into the crowd which got the audience more exhilarated. He stood in the pit among many fans as they mimicked his “ooh’s” and “oh’s” repeatedly. Once the song was over, the night came to an end. Babcock explained how they do not and will never do an encore. “Encores are stupid,” Babcock nonchalantly stated. After their explanation Pup’s guitarist, Steve Sladkowski, spoke about how they donate to different causes while they’re on tour. Sladkowski then announced that the band donated to a local Planned Parenthood and spoke about how the band supports abortion and always will. The crowd roared in excitement and passion while Sladkowski continued to say “If you don’t support or decision then get out!” Pup continued to play their two last songs then said their goodbyes. Once they left the stage, the main lights turned back on then all you saw were sweaty people, many cups, and lost items. Their set was crazy, fun, exciting, welcoming, and even aggressive. I guarantee that many people, including me, had the time of their lives on the night of September 24th at the Delmar Hall.