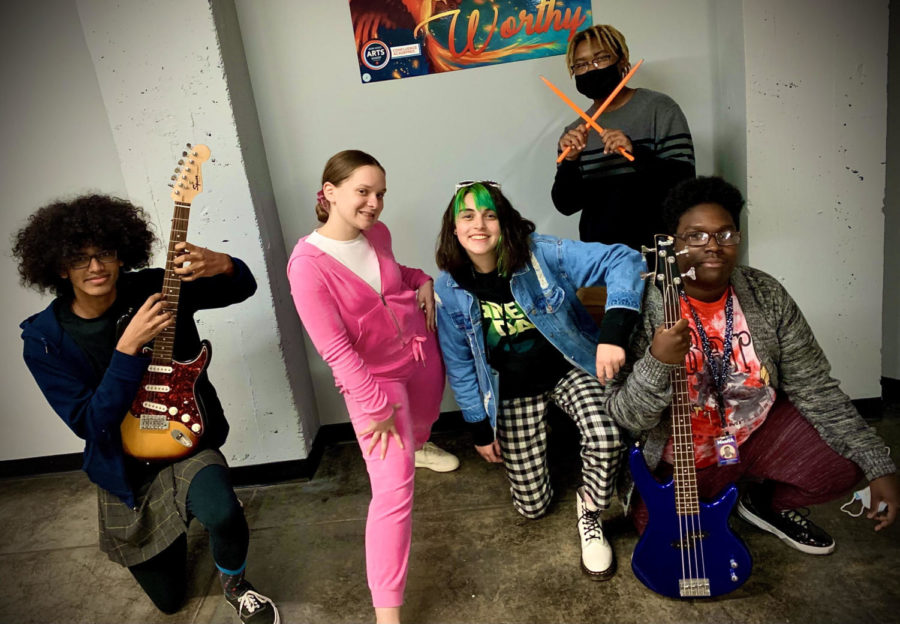 GCAA stage band was given an opportunity to participate in Saint Louis’ own “Teen Talent Competition”!

The idea came from senior Rebecca Gilbert who heard about the competition from a friend from her after school choir, “Music All Star Chorus at the Sheldon,” and decided to participate.

“I was originally going to do it by myself but I thought we’d sound better as a band so I invited them,” said Gilbert.

Brian Vaccaro, guitar and jazz ensemble teacher and adviser to stage band, “April 37nd” could not be prouder and brought the idea of stage band to GCAA so the school could be recognized for its possibilities..

“The idea is like, you know, it’s not only to get them seen and recognized but to, you know, be a representation of stuff that happens here in this school,” Vaccaro said. “So take them out to community events or public shows or things that can draw attention to some of the programs we have here. That was kind of the whole point.”

Through auditions and selections, the members of GCAA’s stage band, “April 37nd” was selected!

The name of the band comes from a simple joke,

“It was basically a due date on the wall or something and we just replaced the due date with April 37nd and it’s hilarious,” said freshman William Carson.

But they kept it because it unified the band through it’s humor,

“It became, honestly, just because it doesn’t make sense,” said Gilbert. “ And people won’t understand but we will.”

Members clearly state that the experience of stage band is out of fun and passion for music.

Though there is a cash prize and other opportunities, the band reports that the primary reason they wanted to participate was to get recognition and experience.

“I mean there is a cash prize and stuff,” said Gilbert. “But we don’t even know how much that is. We’re not really thinking about that. We just want all of the experience basically.”

The song performed for the contest was “My Future” by popular singer Billie Eilish.
A song primarily chosen for its compatibility with Gilbert’s voice and it’s (as described by Whitson) “sexy chord progressions”

All members are very confident in the way they played and reported to have majority positive feedback,

“We overall sounded better than we ever have like when we did it,” said Gilbert. “We really put our hearts into it and the judges only had little nitpicky things to say.”

In fact, according to the band they were able to surpass many who were cut.

“I counted. How many people were on the list and how many people like auditioned and from my calculations, 25 people got cut or 25 acts. But not us,” said Whitson

The band, April 37nd, now gets to go to the next round located at Kirkwood high school, and if they pass they will then be able to go on to the final round set in the fox theater!