Student project seeks to provide relief for classmates with anxiety 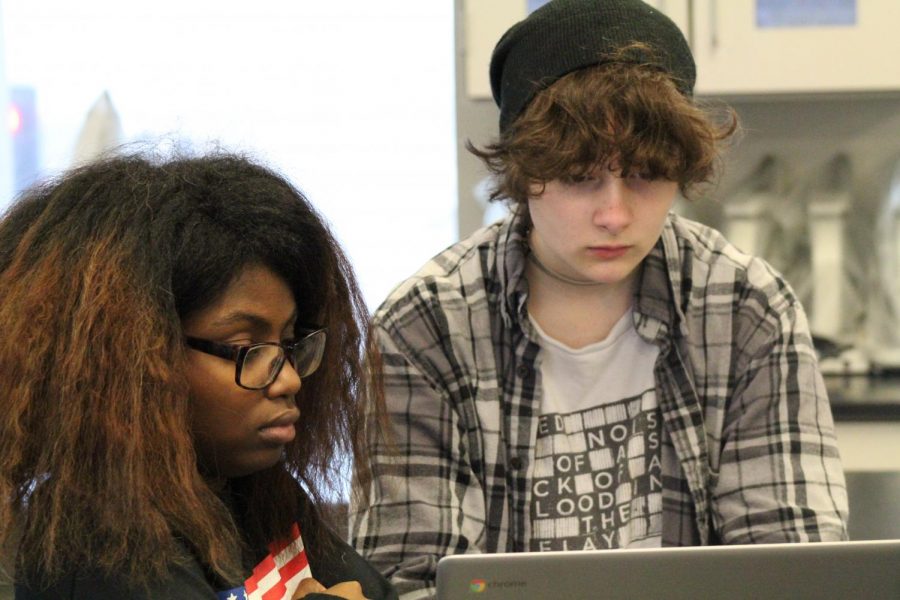 Photo Illustration. Tonia Williams and Orion Yarbrough work on a Chromebook in Makerspace. Williams and Yarbrough are two of several students whose project is a national finalist in the Samsung Solve for Tomorrow contest.

Her erratic heartbeat thumps noisily in her chest, speeding up by the second. Everyone’s gaze locks in her direction and she feels as if the world is closing in on her and preparing to swallow her whole. Everything is moving in slow motion: the whispering of her classmates, the subtle tapping of feet, the rustling of turning pages. All of the small things seemed more accentuated, sharper.

Kaitlyn needs to breathe, but she can’t; she can’t focus on breathing with everyone’s eyes on her, staring. The best thing she can do is raise her hand to ask to go outside and take a second to breathe. But this is not as easy for Kaitlyn as it is for most people. In a situation like this, where Kaitlyn needs to raise her hand to ask to step outside, she has to answer one question:

Is it worth it?

“For me at least, [anxiety]’s very hard to cope with a lot of the time, because I can’t always choose between whether or not it’s worth it to raise my hand and leave, because it could make it worse,” sophomore Kaitlyn Eckhard said.

This experience is just one of the many that Eckhard has gone through. Having dealt with anxiety for most of her life, Eckhard struggles with finding the strength to raise her hand to ask to leave when she’s feeling overwhelmed.

But Eckhard is just one of the many students around the globe that struggle with social anxiety. This is why Makerspace students decided that they wanted to create something for students who struggle with this same problem: being able to step outside without raising their hand and drawing attention to themselves.

“Samsung hosts a contest, it’s called Samsung Solve for Tomorrow, and it’s a way to get students excited about STEM… since we are an art school, I make it into a STEAM project, so it’s science, technology, engineering, art and math,” says Makerspace teacher Laura Schuhwerk.

The prompt for the Solve for Tomorrow contest is to use STEM to solve a problem in the local community. Sophomore Orion Yarbrough, wanted to create an invention that would allow students to silently alert a teacher when they need to step outside; therefore, eliminating the attention a student would get when asking a teacher out loud.

“We’re still really developing [the invention], but the premise is an app that a student can use in class if they’re feeling anxious or overwhelmed, so they can say, text the teacher… so they can just leave the class without having to confront them, ‘cause [that can] make their anxiety worse,” Yarbrough said.

Yarbrough is not the only one working on the project however; he is on a team with four middle schoolers and three other high schoolers: sixth grader Coen Landgraf, seventh graders Guadalupe Flores-Delgado and Trinity Knox, eighth grader Olivia Hebenstreit, freshman Paul Wallace, junior Clara Lehmannwood, senior Tonia Williams and their teacher, Laura Schuhwerk.

“So, we’re just pulling a team of students that are interested in working on it… into like an after school program,” Schuhwerk said, “…they’re gonna be the ones to help come up with the ideas for the Activity Plan that we have to submit. And then, from there, if we are chosen [to move on in the competition], they’re the ones that are gonna be working on the project.”

With such a large prize, each school is only able to submit one proposal to the contest, and the Makerspace classes—both middle school and high school—wanted Yarbrough’s invention to be the one to represent GCAA. Schuhwerk thinks she may know a reason as to why this invention was so popular among her students.

“I think that [the students chose Yarbrough’s project] because it was—the idea was a little innovative and I think that there’s so many students struggling with those internally,” Schuhwerk said. “I think that’s what kind of triggered a lot of people to vote for his, because it was a really kind of innovative way to discreetly say, ‘hey, look I need some help.’”

Being an aware student, Yarbrough sees how many students will get anxious and need to take a break. He also notices that they aren’t always able to because they don’t want to raise their hand or a teacher won’t let them leave.

“I came up with [the invention] because I was thinking about, what could really help my community? What’s a lot of problems that I have and I see a lot of my friends having? And I thought about like mental health, and how a lot of them talk about how a teacher wouldn’t let them leave when they were having a panic attack in class, or didn’t take them seriously. And I thought maybe I could do something to help with that,” Yarbrough said.

If they move on to the next round, one of their first plans of action will be an anonymous survey for all of the students at GCAA. It will likely include questions about your own personal struggles that you are dealing with (such as anxiety or depression) and/or what sort of things you’d like to see in the invention. They want to do this because it will give them a way to see if their invention is actually making a difference in the lives of students.

“I think that’d be very helpful, I think it’d be helpful for a lot of people,” says Eckhard, “Even for people who, you know, don’t have anxiety—for people who are just having, you know, rough days, ‘cause everybody has their days.”

Eckhard hopes this will work out too.

“[It] is a really good idea. I think it’s really simple and it gets straight to the point, and it alerts the teacher of what’s going on without having to go into specifics right away.”