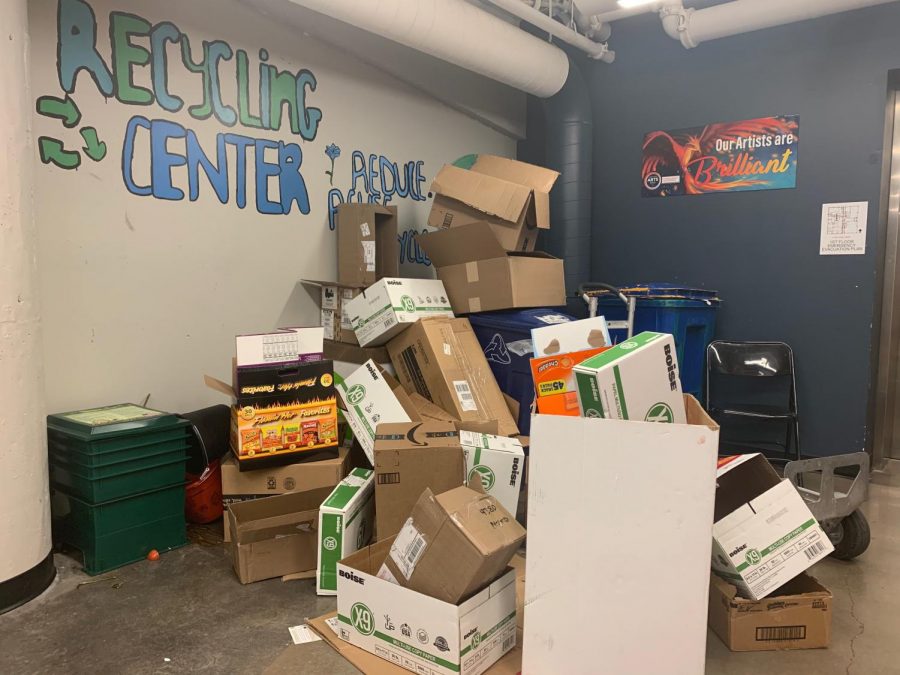 Four days' worth of uncollected recycling sitting in the recycling center.

*Due to the temporary closure of the school the recycling program will now be halted.

The recycling program is back in operation after a month-long lapse in funding which prevented the recycling from being picked up from the dumpster or collected by students.

Last year, the recycling program was started on October 1 as part of the Green School Quest program, a Missouri-wide initiative to make schools more environmentally sustainable for the future. The program is organized and run by the students of the Green Machine, overseen by teacher Cassandra Lentz.

“Green Machine kind of transitioned from just being about the towers, which are the actual green machines, to more of a sustainability program,” Lentz said. “It is a really great opportunity to show the kids and help the kids understand what’s going on in their world and how they need to adjust themselves for what could or could not happen.”

The Green Machine had run into several roadblocks this year even before this abrupt cutoff. Due to a shift in administrative staff, the bill for recycling pickup was not paid over the summer, and it was therefore not picked up over the summer or at the beginning of the school year.

“[The office staff] didn’t know about it. Once it did get paid, finally, it took almost another month to get it picked up and for the money to go through. So we have the dumpster that has been full several times this year,” Lentz said.

Due to the bill being unpaid, the recycling could not be collected from the classrooms or taken to recycling facilities.

“Our dumpster is continuing to not be picked up, and so we can’t collect the recycling because we have no place to put the recycling, and so it becomes that cycle,” Lentz said. “The people are still putting it down there, thinking, and waiting for it to be picked up.”

Lentz was understandably worried about the program being discontinued due to cost.

“We had the program and then they took the program away because of cost, years ago. We had some blue bins that were just being used as trash, some that weren’t [being used],” Lentz said. “It just comes down to the fact that to get it picked up costs money.”

Lentz described the students of Green Machine as passionately interested in the recycling program and invested in the environment.

“They’re not quite Greta Thunberg yet, but there are a few that are within that same range of passion. None of them are going to yelling at the U.N. yet, but I can see a few of them leading to there,” Lentz said.

Several of the students also described distress over the lapse, including freshman Ilisa Zimmerman, who is not in the class but is still engaged with the program.

“I’m kind of upset about that, because we did work really hard to get it started, and it was something that was really working for the school for a while,” Zimmerman said.

“We had a billing mixup where the bills were going to the wrong person, and so we weren’t aware, and they weren’t picking up, and we were calling and figuring out ‘Well, what’s going on, why aren’t you picking up?’ ‘Well, we don’t have the bills, and we didn’t know where they were,’ and we got them directed to the right person,” Head of School Ashley Olson said. “We still had some miscommunications, just clerical issues, but now the bills are being sent to the proper people.”

The issues were never related to cost, according to Olson. The recycling program is now fully back in operation, much to the relief of Lentz and the Green Machine.