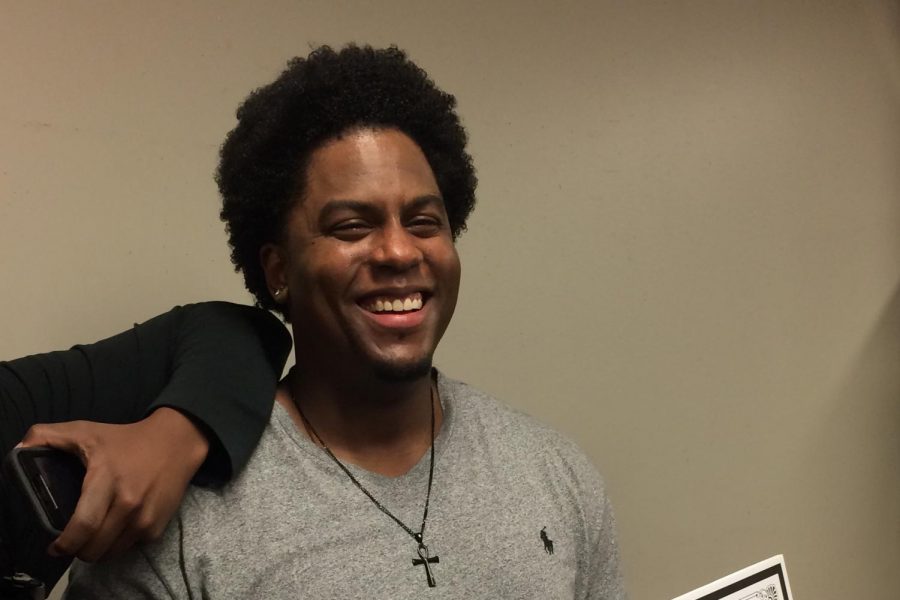 On the morning of Thursday April 18th, theater teacher Brandon Riley was awarded the St. Louis Post-Dispatch’s Teacher of the Month award for April.

“I got an email [on April 17th], and at first I thought it was spam… ‘cause I’m just not a good self promoter. So I saw it and I was like, is this actually for me?… I was kind of taken aback, ‘cause I don’t do self promotion, sometimes to a fault, and so that means that somebody else had to have nominated me, which was like, just—for someone to think that you’ve done something worthy of being nominated for is—that was enough for me,” Riley said.

At about 7:40 in the morning on April 18th, St. Louis Post Dispatch representatives arrived at GCAA to take pictures with Riley outside of the main office. As curiosity grew, more students began to crowd around the scene and began clapping and cheering for their teacher. While Riley appreciated the recognition, the attention also made him feel just a little uncomfortable.

“It was really cool to have the work that you do be appreciated. And then, on the other hand, I’m so much of a… ‘look-at-me’ person. I genuinely do the things that I do out of a love for the work and for the kids. And so, that was a little uncomfortable ‘cause it was very much ‘look-at-me’, which was kind of counter to how I am, despite me doing theater… It was great but also just a tiny bit uncomfortable ‘cause it was all attention on me,” Riley said.

After receiving a prize of $500 in gift cards, coupons and cash, Riley’s aversion to being the center of attention influenced his decision on how to spend some of the winnings.

“The first thing I bought with the money is something for the show. I’m gonna try not to use all of it for that, but there’s a decent chance I’m gonna use more of that for the show. And then the rest of it I’m just gonna kind of save just for those little things that come up… I’m trying to have money not be our problem [for the musical], as much as I can anyway, until the show happens,” Riley said.

Visual art teacher Caitlin Munguia nominated him many months ago for this award. According to the Post Dispatch’s article on Riley’s achievement, Munguia explains why she nominated him in the first place.

“His heart for our students and community can easily be seen in his commitment and dedication. He is passionate and talented, and he uses these strengths to advocate and empower the next generation, as well as his colleagues… There is no one more deserving of this award then Mr. Riley,” Munguia said.

While he admits to not being perfect, Riley says that he sincerely tries his hardest and does what he does because he feels like it’s the right thing to do.

“The whole thing has been a bit of a surprise and a bit of an affirmation ‘cause I legit don’t do it for the pats on the back… so when I get recognition or people are say—even just small like ‘hey, we really appreciate that,’ or ‘thank you’… those things mean a ton to me. So to have Munguia just based on seeing the work I do and seeing how much time I put in, to nominate [me], that’s awesome. And all the people that were being very nice this morning, that was awesome. And so that helps continue to do the things that I’m doing, despite little negative moments here or there, little slip ups, those things help continue to fuel the fire to do the things that I’m doing.”