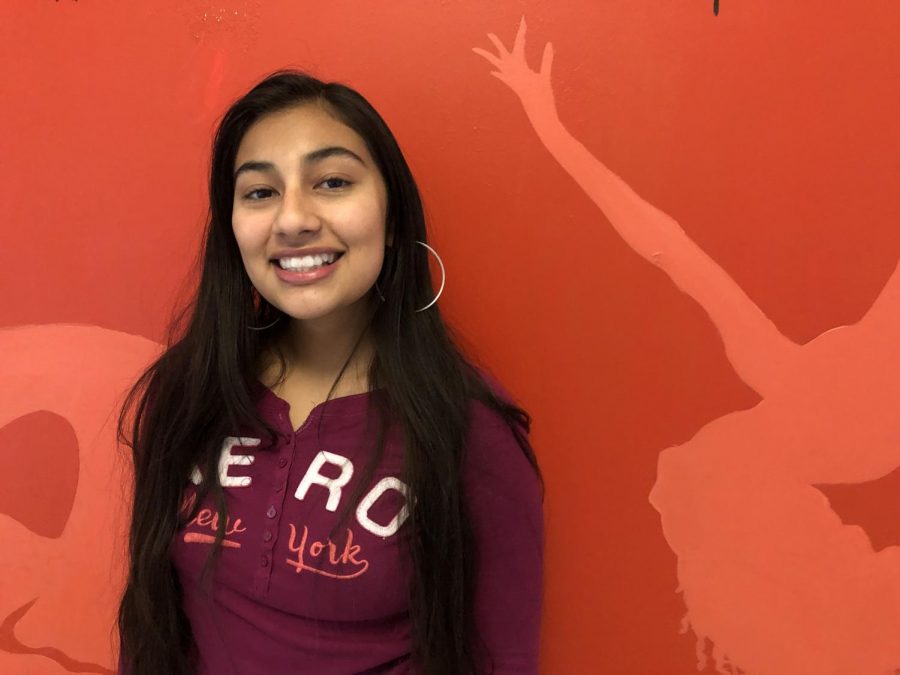 In front of a mural representing the theatre and dance departments, sophomore Nayla Nava poses for the camera.

Sophomore Nayla Nava is the co-founder of Afrospanic Atmosphere, a company that sells apparel that promotes African-American and Hispanic involvement in science, technology, engineering, art, and mathematics, or STEAM for short.

“We want to empower women and men in STEAM. There’s a lack of representation, and we need those numbers to go up and our people to do amazing things and leave their mark in STEAM,” Nava said.

Nayla’s quest to promote minorities in STEAM is personal, and she has one story she likes especially: Guillermo González Camarena, a Mexican inventor.

“I remember when I was younger, my mom told me a story of a Mexican man that created color television, and I was just inspired!” Nava said. “That’s our stated purpose: we want our community and our people to be aware of the people doing great things.”

“We want to keep it to men and women, but there are some ideas we get for the feminine side, or the masculine side, but we want to make this gender-neutral,” Nava said. “We want anybody to buy a T-shirt, not just say ‘Oh, only Mexican-American women buy this!’ No, we want to appeal to everybody.”

The business began last year through the joint effort of Nayla and her partner, Maya McGregory. The two met through during the Youth Exploring Science (YES) program at the Science Center through a partnership with the Network for Teaching Entrepreneurship (NFTE).

“My partner, Maya McGregory, actually started the business and the idea back in August of last year, and I started working at my job in the St. Louis Science Center in January of this year, so everything just exploded when I got there,” Nava said. “I saw Maya was working on a T-shirt design for the business, and I really liked it because she wanted to involve her culture and empower her culture, and I was very attracted to that, so I wanted to work with her.”

The process of starting a business usually does not come without struggles, and one of the major problems for Afrospanic Atmosphere has been budget concerns.

“[A] big struggle is the quality of our T-shirts because we started with a very affordable budget, and we had to buy t-shirt transfer paper, and that didn’t help with the quality of our t-shirts,” Nava said. “Sometimes, the transfer paper wouldn’t come off, and we would be exhausted because we just wasted a shirt. It would be those types of things, or people would say ‘Oh, this shirt is too big, are there any shirts for younger children?’ And we were like ‘Aw, dang!’ because that’s the people we want to target, we want to target children and teenagers to be inspired.”

Despite encountering problems, Nayla’s company is already making waves. As part of the partnership with NFTE, Afrospanic Atmosphere entered a competition against other youth-owned businesses.

“We won regionals this spring, we went first place in Missouri, and that led us to New York. In New York, there were 28 businesses, we were one of the 28, competing against others,” Nava said. “We did not pass the first round, but it’s all okay because it’s just a learning process and it helps us grow.”

Nayla enjoys the creative freedom that comes with her job and is optimistic about the future of her company. She has plans for expansion, both creating new products and improving the old ones.

“We’re just really excited, honestly. There are so many new earring ideas and T-shirt ideas, and we want to do more things for men,” Nava said. “There is a lot coming on the way, there are a lot of future things we want to expand, we do not want to stop.”