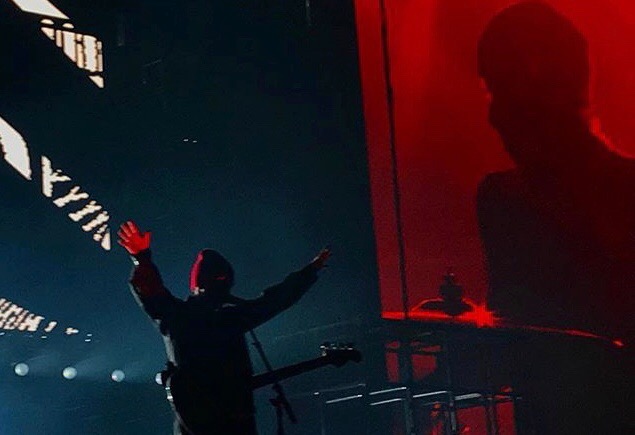 Tyler Joseph with his arms in the air as he greets the crowd.

Many surprises came to be at the Twenty One Pilots show held on Friday, October 19. The second that you reached the venue you knew exactly what you were there for. Hundreds of fans were camped outside the Enterprise Center hours before  doors opened, flaunting their army green, yellow, and grey Twenty One Pilots merchandise. Around 2pm, the venue workers went around numbering everyone down the line. Everyone looked perplexed about why they were numbering us, but naturally we all went along with it. Around about 5pm, it started to get uncontrollably crowded and everyone was itching to get in. Fans were getting mad, cold, and impatient until 5:45 when they opened the doors at the Ford entrance.

The venue workers had us form two lines in order with our numbers that we were previously given and everyone was still confused. Finally, at about 6:15, the line started to move. Once we got to the actual arena we realized that we were being taken to the pit, which is right near the stage. After confusingly looking around, I put two in two together that they numbered us as first come first serve. This meant that no matter what ticket or seat you bought, you could still be in the front row if you were early enough, which I think is very generous of the band to do.

Twenty One Pilots came on stage at around 9:15pm, after their two opening acts Max Frost and AWOLNATION. They started with a large curtain opening to drummer Josh Dun, wearing a black ski mask while holding a lit torch. As Josh hit the bass drum, singer Tyler Joseph also arose from the darkness. They started the concert with a new song called “Jumpsuit” from their album ‘Trench’. The crowd became wild as flames arose from the stage.

Each song had smooth and quick transitions into the other song no matter what. There were amazing clothing changes, scenery changes, and stunts done by each member. Though, during their song “Pet Cheetah” I experienced an unfortunate event due to the bands’ fans.

While the band was communicating with the audience on another stage, there were two security guards giving fans water near the front stage. I noticed myself getting very dehydrated, so I started heading towards the front. As I made my way through fans, I noticed an obstacle. I was overwhelmed in confusion as I looked up at a fan who was blocking me from getting in front of her. I struggled to get around her and began to have an anxiety attack. A couple of other fans let me around her until I reached ANOTHER group of fans who didn’t let me get through. I had to make it clear that I was about to pass out, then I resumed to get my water.

Once I got back to my spot, I calmed myself down and experienced an amazing ending to the show. The band finished the second half of the show with many surprises. At one point Josh Dun placed a platform with his drum kit on our hands. He then walked on the platform and started to play a drum solo to their song “Morph”. During their last song on the set list, “Trees”, Josh did that again except with just a large bass drum. He poured water on the drum causing water to splash on us during every beat. Yellow and green confetti poured everywhere as the song ended with many fluorescent lights. Overall, this concert was exciting, energetic, beautiful, clever, and show stopping.