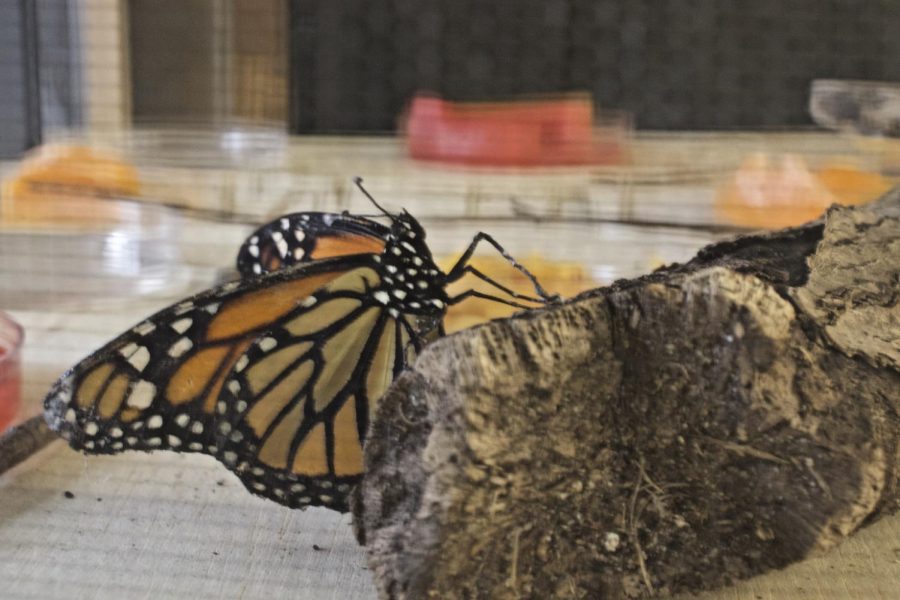 The first hatched butterfly out of the four leaning on a branch.

They say hands-on learning is the best way of learning for students, but it’s not the most common. As for Cassandra Lentz’s sixth-grade science class, they are familiar with this approach to learning.  Two years ago when Lentz first came to GCAA, she brought with her a female turtle that the classmates now named ‘Dudette’ and added many more different creatures. She had done work with the green machine (where the students grew different plants on a machine that helped maintain the plants’ health indoors) and now own multiple plant species; a turtle, a few tadpoles, a grasshopper, and now caterpillars. These caterpillars aren’t just pets, but she mustered up the idea to build a butterfly habitat for the students to teach them about sustainability, migration, and development. It all started with Emma Deaton, a past GCAA student of Lentz’s, who owned caterpillars.

“Emma’s mom and her monitored the milkweed for monarch butterflies for years,” said Lentz. “And I had gotten an email asking if I had wanted a monarch egg, because they had found some. So, I had said, ‘Yeah of course, we will monitor these monarch butterflies.’  Last year, we had tried to do a small unit on the symbiotic migration where we did an exchange with a class in Mexico where monarchs migrate and with the green machine class being so focused on sustainability, I thought it would be a great opportunity to bring in lessons on monarch habitat loss plus climate action and everything else we’re doing.”

The hands-on learning didn’t just end with having actual caterpillars, but it continued with the construction of the habitat.

“So I had started looking at these habitats online,” Lentz continues. “And I thought to myself, ‘Why am I buying one, when my students can make one?’ for pretty much the same price.”

Cassandra Lentz’s father, Lesley Lentz, who works with the contracting company that hires the custodial staff at GCAA, went through some things he had at home to start the construction of the habitat.

“I don’t think you want your kids handling the nail gun,” Lesley Lentz points out to Cassandra. So, with that said, Cassandra Lentz invited her father to come in to help the students start building.

“I enjoyed being apart of the creation of the butterfly habitat,” says Calvin Gilbert, seventh-grader. “She came to the front of the class and asked who wanted to be in on building it and I volunteered.”

Since Calvin and several other students helped build the habitat, Emma brought in more caterpillar eggs as the students studied the caterpillars’ behaviors and habits until they weaved themselves into their cocoons.

As of September 26 and 27, three of the caterpillars had formed into monarchs and the fourth one should be out by next Tuesday.

“My plan is once we are done studying the monarchs, I will probably go to this insect store in the Shaw neighborhood to get some more caterpillars of a different kind to add more to the habitat,” said Cassandra Lentz.