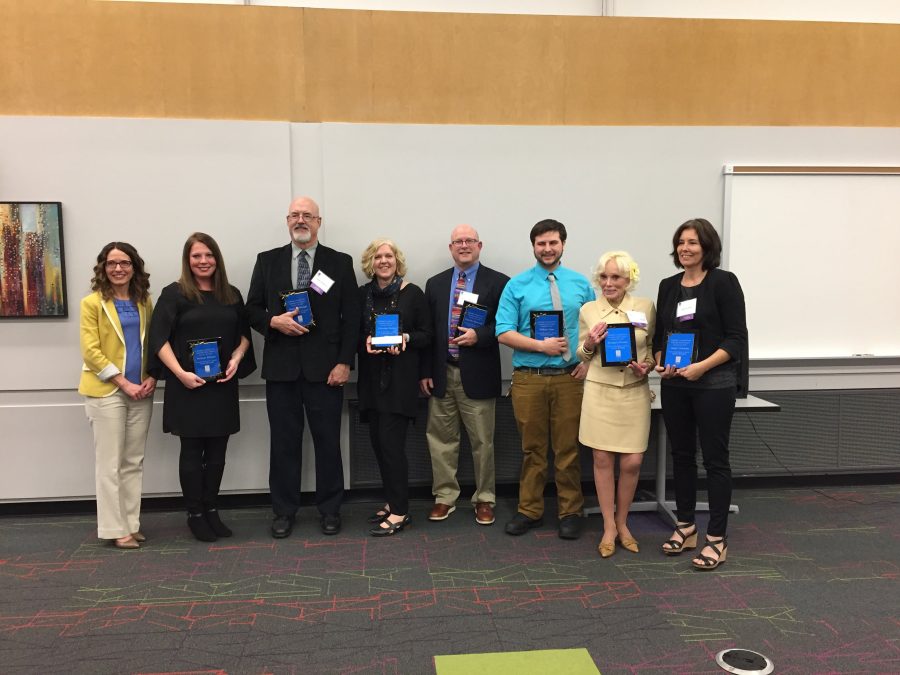 Christine Nobbe (fourth from left) stands with recipients of the Challenger Space Center’s Inspiring Teacher Award. This award is given to teachers who encourage their students to go into STEM fields.

In 1986, the Challenger Space Shuttle launched in Florida with a crew of seven on board, including Christa McAuliffe who was supposed to have been the first teacher in space. However, just after a minute into the flight, the shuttle ended up disintegrating over the Atlantic Ocean. After the accident, families of the crew members who died on board opened the Challenger Space Center. One of the things the center does is give out the, “Inspiring Teacher Award” each year to seven teachers in the St. Louis area. These teachers are considered inspiring because they encourage their students to go into the STEM (Science, Technology, Engineering, and Mathematics) field.

The point of the award is to recognize those teachers and thank them for encouraging their students to go into STEM. This year, Christine Nobbe, instructional coach, was one of the seven recipients of the award.

“Most educators go into education because they love teaching and they love kids, but we don’t make a lot of money and we don’t get a lot of big rewards, so having some [rewards] like receiving this award is cool because it helps to show that we’re appreciated,”

This award is really important and prestigious because it shows teachers in the STEM fields that they matter and are appreciated.

Since Nobbe was four years old, she knew she wanted to be a teacher; however it wasn’t until the Apollo missions to the moon from 1963-1972 that her passion for space began. She immediately came to the conclusion that since people had been brought successfully to the moon, there would soon be a city on the moon. She imagined a life for herself that would either involve teaching kids who would end up living and working on the moon or involve her living and working on the moon as a teacher. Nobbe sees space as an awe-inspiring field and believes that anything can connect to space: “For instance,” she says, “Maybe you want to be an author. Maybe you want to be the great American novelist. Well you can write a novel about space. And really, the field of space exploration needs all kinds of people. If you go visit a NASA center, you realize it is a little town… You have everybody there: you have social media specialists who are tweeting about the launch that is about to happen; you have firefighters who are right there ready to go in case of an emergency; you have medical doctors that have worked with the astronauts to get them on that flight, ready. You have to have an entire town. So if you have a passion for space and you have a passion for something else, whatever it is, the two can go together.” Nobbe hopes that her message can inspire students at GCAA to explore the space field and even connect it to their passion for art.

Nobbe sometimes had to miss out on spending time with her family to work or do something for her students, so she feels that it is nice to be recognized for the hard work she has put in over the years for her students. Nobbe hopes that in receiving this award, students will realize that she is interested in space and talk to her about it and use her as a resource. She also believes that receiving this award will “bring a positive light” upon GCAA and the public eye.

Nobbe receiving this award is proof that hard work really pays off: “I would encourage everyone to figure out what they enjoy beyond themselves… Figure out what you love, whatever it is, and then go for it.”

Christine Nobbe continues to inspire students in the STEM field

Since the publishing of “Christine Nobbe receives Inspiring Teacher Award, encourages STEM involvement,” describing the Challenger Award Nobbe won earlier this year, Nobbe has already received a wave of positive feedback from the article. One in particular stands out: a Facebook comment from the mother of two of Nobbe’s former elementary school students detailing how both students have since gone into STEM fields and are grateful for Nobbe’s encouragement to pursue that field of study.

When she first saw the comment on her Facebook post, Nobbe’s “heart went thump-thump and [she] thought, ‘Thank goodness, it’s working!’” By “it,” she means her early introduction of STEM to students using motivating topics and hands-on projects. “I’m glad I helped girls find a passion in the STEM fields where there are interesting, challenging, and exciting careers,” expresses Nobbe. In this instance, Nobbe can clearly see where her influence has reached her students.

Inspiring students means a lot and is very important to Nobbe, who says she “spent a lot of time at school planning lessons, creating special projects for students, and collaborating with teachers, parents, and the community,” when she was a full-time teacher, even sometimes at the expense of her own family life and personal life. “I’m glad my efforts made a difference,” Nobbe reflects.

As for what comes next for Nobbe, she’s not quite sure. Because of her passion for space, she had dreamed of working for a space company, such as SpaceX, in their outreach department. However, because most of these companies are on the West Coast, that hasn’t happened yet. In addition to doing a lot of outreach at the Science Center, county libraries, and in Rockwood schools, Nobbe is currently planning the International Space Development Conference which will be held in St. Louis during Memorial Day weekend. Although this is far from the end of what she hopes to achieve for St. Louis, some of her long-term goals include bringing a Spaceport to St. Louis, and bringing the International Space University summer program to Parks College-SLU or Washington University.

Because of her connections in the Space Exploration community, Nobbe “was able to get GCAA a ‘flown in space’ experiment,” in which students in Mr. Goodin’s class designed experiments that will be flown into space. “Now that we ‘have our wings,’ maybe we can do a more extensive experiment where we fly more complex experiments in space,” Nobbe said.

View Comments (2)
About the Writer 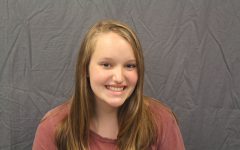